On March 15th the nominations for the 93rd annual Academy Awards will be announced. In the near-century long history of the Oscars, only five women have been nominated for Best Director: Lina Wertmüller for ‘Seven Beauties,’ Jane Campion for ‘The Piano,’ Sofia Coppola for ‘Lost in Translation,’ Kathryn Bigelow for ‘The Hurt Locker,’ and Greta Gerwig for ‘Lady Bird.’ Of those five women, the only winner was Kathryn Bigelow – and that was a decade ago! This year, the Golden Globes made history by nominating three women for Best Director, bringing the total nominated at that ceremony to a whopping eight. With Chloé Zhao being the first woman to win since Barbra Streisand took home the award for 1983’s ‘Yentl.’ These stats are not low because there haven’t been deserving women that directed movies. These stats are a symptom of a systematic bias that has been under investigation by the ACLU and U.S. Equal Employment Opportunity Commission, and studied by scholars like The Center for the Study of Women in Television and Film. But you don’t need data and lawsuits to know women are equally as deserving of these accolades as their male peers. You just need to watch their films.

This year three women have seen their films nominated by numerous awards bodies: Chloé Zhao, Emerald Fennell, and Regina King. But their films are not the only films worthy of being feted this year. In fact, the Academy could fill both their five Best Director slots and ten Best Picture slots completely with films directed by women this year. Let’s take a look at the contenders, shall we? 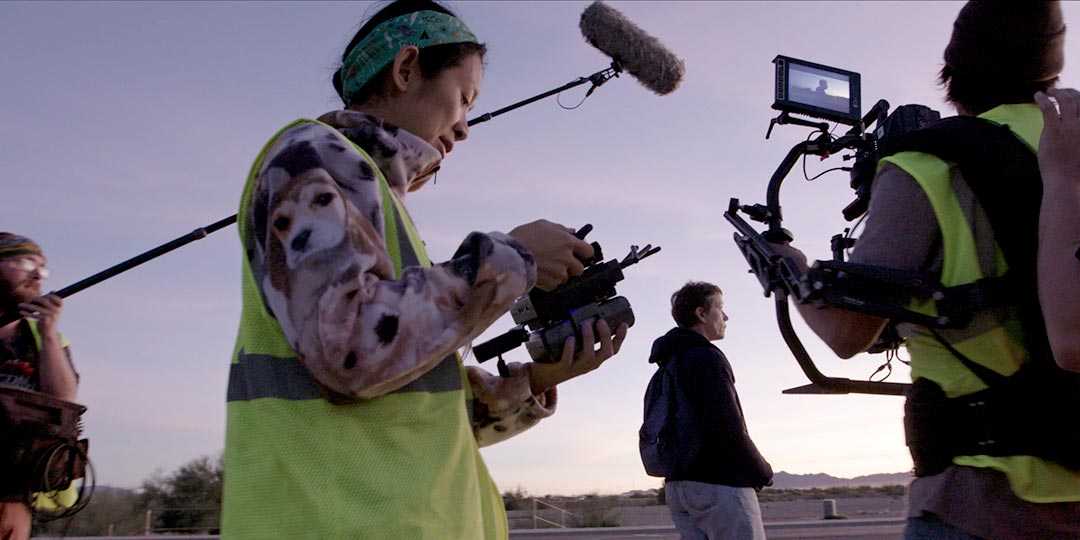 Director/writer/editor Chloé Zhao on the set of ‘Nomadland’
The most awarded film of the year, Chloé Zhao’s ‘Nomadland’ is this year’s frontrunner for both best director and best picture, especially after Zhao’s historic win at the Golden Globes. The film is led by a powerful, yet understated performance from Frances McDormand, but also features spirited turns from non professional actors as well. Over the past decade Zhao films have captured the spirit of the contemporary American West like few filmmakers before her. With ‘Nomadland’ she also taps into our country’s current economic disparities with a deft and compassionate hand. 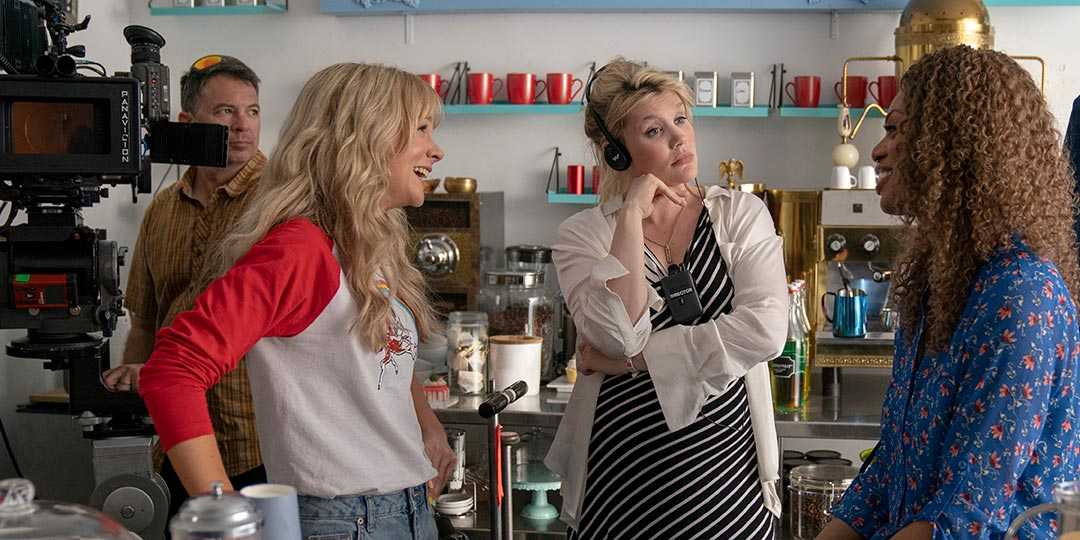 Carey Mulligan, writer/director Emerald Fennell, & Laverne Cox on the set of ‘Promising Young Woman’
One of the most divisive films of the year, Emerald Fennell’s ‘Promising Young Woman’ deconstructs the idea of ‘nice guys’ and the subtleties of rape culture. Fennell uses a bold candy-colored palette and pop-song infused soundtrack to create a stark contrast between the visuals of the film and its themes. Pointed casting of TV boyfriends of yore to as would-be rapists, and Carey Mulligan’s fierce performance as Cassie, a woman whose trauma manifests in extreme behavior, demonstrates Fennell’s skill as a director of actors.

Regina King – One Night In Miami… 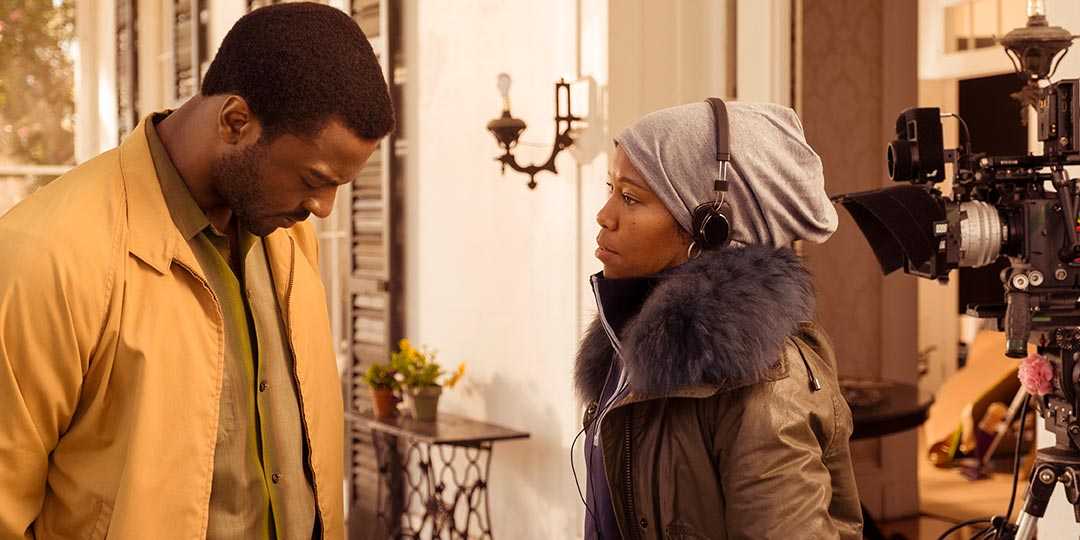 Aldis Hodge and director Regina King on the set of ‘One Night in Miami…’
An Oscar-winning actress herself, Regina King has directed episodes of television for almost a decade and with her feature film debut ‘One Night In Miami…’, proven herself to be one of the great multi-hyphenates in the business. Although based on a stage play by Kemp Powers, King crafts scenes that are anything but stagey. With her cast playing icons Malcolm X, Muhammad Ali, Jim Brown, and Sam Cooke, King brings out emotional depth from her actors Kingsley Ben-Adir, Eli Goree, Aldis Hodge, and Leslie Odom Jr., that bring their performances beyond mere impersonations. You feel as though everyone bared their soul making this film. 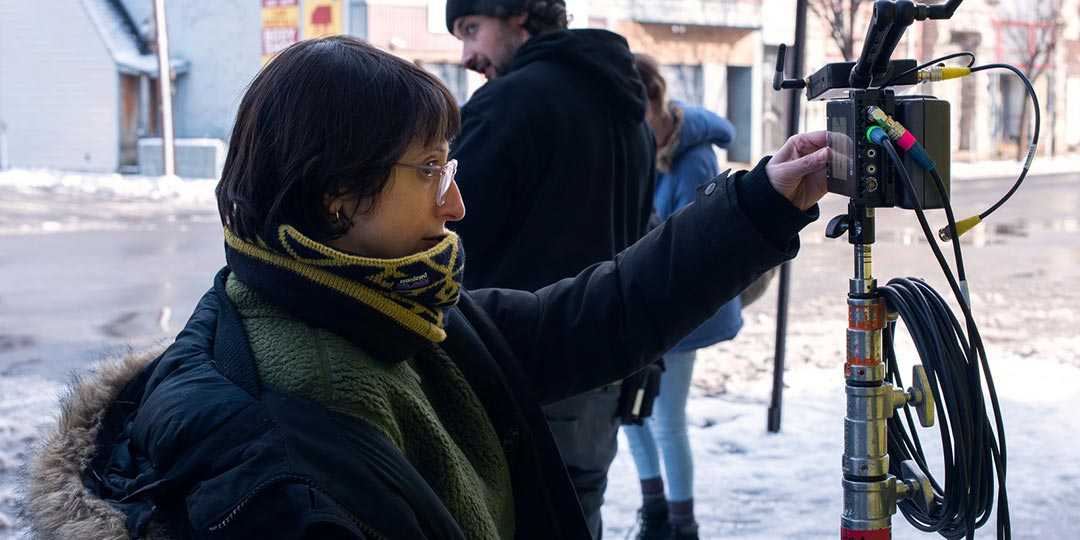 Director/writer Eliza Hittman on the set of ‘Never Rarely Sometimes Always’
Premiering at Sundance and playing at the Berlin Film Festival, Eliza Hittman’s third feature film ‘Never Rarely Sometimes Always’ was one of the last films to hit theaters before the pandemic shuttered many. The drama, which has become one of the years most awards films, follows teen cousins as Autumn (Sidney Flanigan) and Skylar (Talia Ryder) as they make the trek from rural Pennsylvania to New York City in order to receive an abortion. Shot in a neo-realistic style, Hittman throws one obstacle after another at her protagonists without the film ever feeling heavy headed or preachy. It’s tough the way life is tough, yet through it all she lets Autumn and Skylar feel little moments of joy in each other’s company. 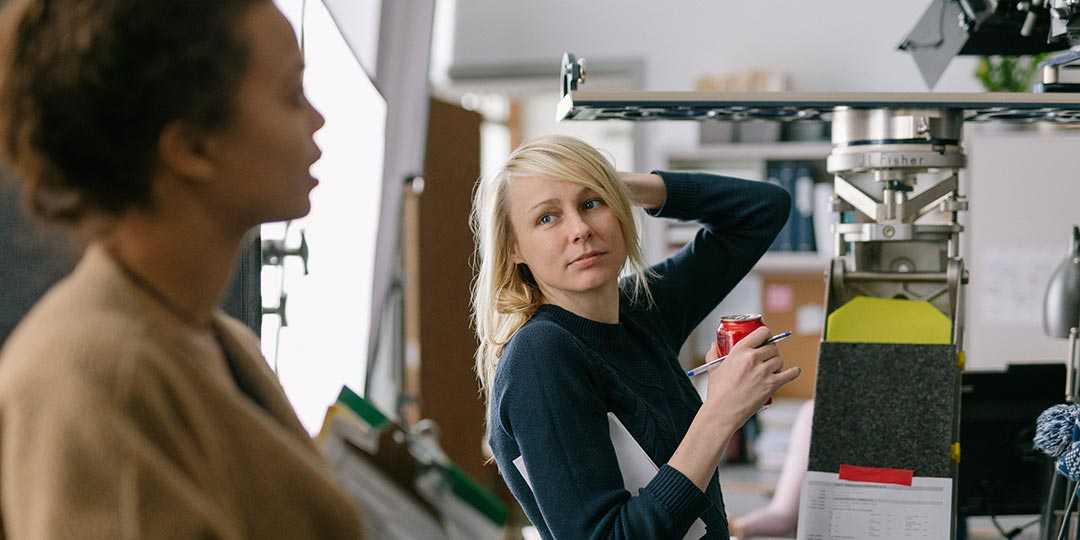 Director/writer Kitty Green on the set of ‘The Assistant’
Debuting at the Telluride Film Festival in 2019 and landing in theaters last January, Kitty Green’s The Assistant tackles the #MeToo movement within the entertainment industry. Green presents an incisive take on the banality of the evil that lurks within its walls by following the titular assistant, played with impressive restraint by Julia Garner, through one terrible day at work. The abuse depicted within the film is found in microaggressions, in complacency, in bureaucracy. As the day ends, the viewer is left wondering how anyone can wade through all that muck just to make a film, yet it also leaves us as breathless as only a great film can. Green forces us to see the cost behind it all and question our own roles within this broken system. 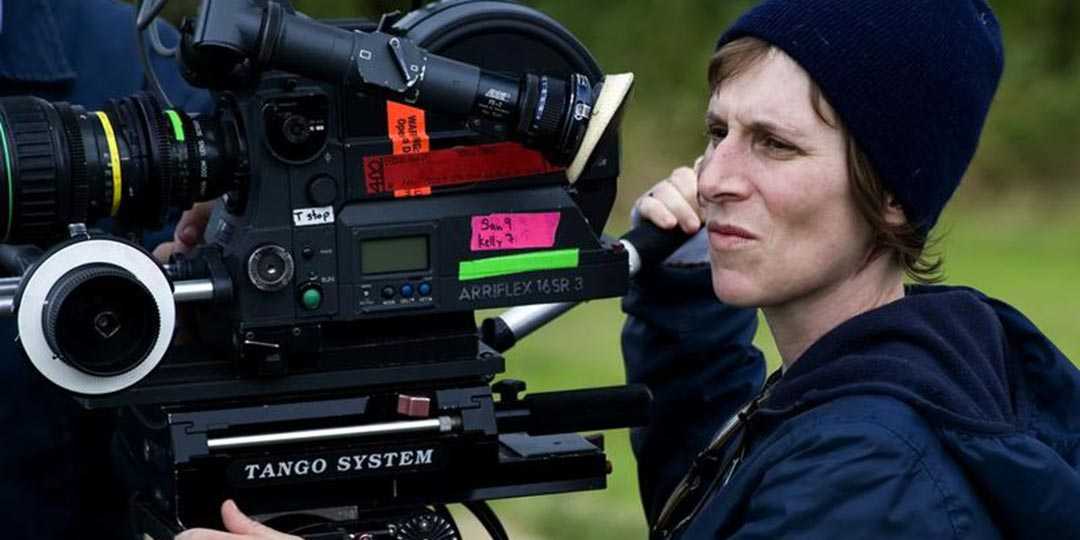 Director/writer Kelly Reichardt on the set of ‘First Cow’
Like Zhao, Kelly Reichardt has spent much of her filmmaking career telling stories of the American West. One character in the film states they can taste London in the oily cake he eats, just as the viewer can feel the Pacific Northwest in this film. Set in 1820, when the PNW was mostly populated by fur trappers and military men, ‘First Cow’ follows the close bond formed by a cook named Cookie (John Magaro) and a Chinese immigrant named King-Lu (Orion Lee). Like she’s done in many of her films, Reichardt uses this setting to explore the more tender sides of masculinity. As the two build their baking business – with milk stolen from the titular cow – their ambitions threaten to disrupt their domestic bliss. Reichardt’s deft critiques on capitalism and class, slowly dismantle the myth of the American Dream, even at its nascency. 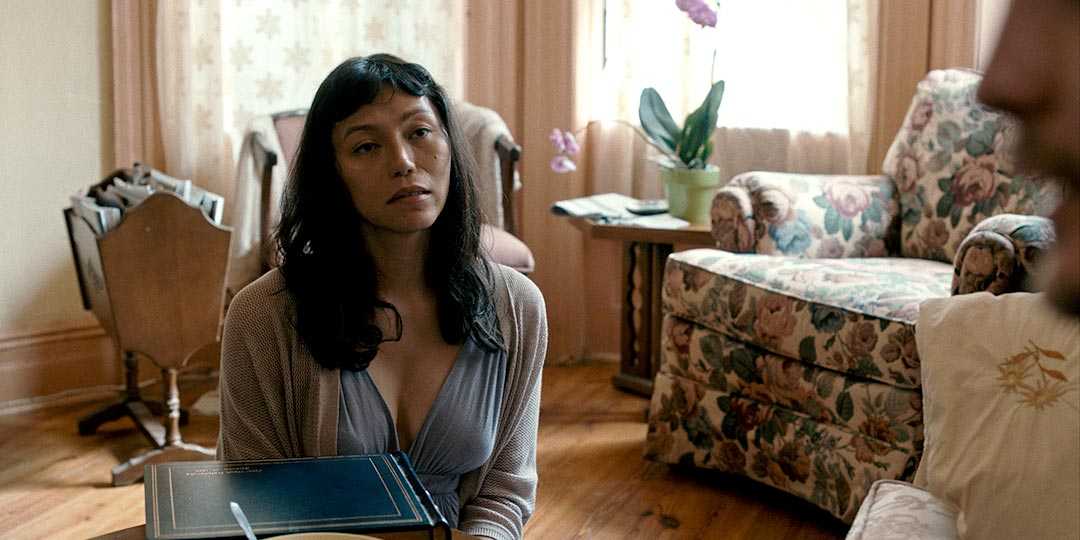 Director/writer/producer/editor/star Isabel Sandoval in ‘Lingua Franca.’
Not only did Isabel Sandvoval write and direct ‘Lingua Franca,’ she also produced, edited, and played the lead role. The film takes a deeply empathetic look at immigration from the point of view of a trans woman who works as a care-giver for an eldery woman in Brooklyn. Sandvoval has a delicate touch to her storytelling, bringing out warm, subtle performances from her cast. Both intimate and understated, the viewer feels as though they’ve only glimpsed a small piece of a much larger picture, and as the film ends you wish you could linger in this world for just a little bit longer. 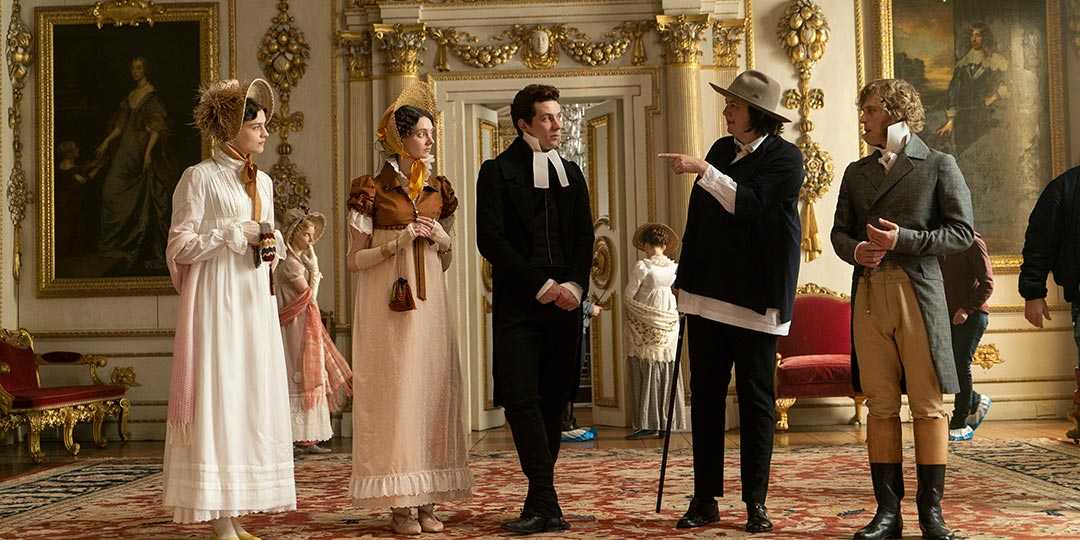 (L to R) Amber Anderson, Tanya Reynolds, Josh O’Connor, writer/director Autumn de Wilde, and Johnny Flynn on the set of ‘Emma.’
There are many things to praise about Autumn de Wilde’s adaptation of ‘Emma.’ The director’s detailed historical research shines in the art direction and costume design. She gets delightful performances from up-and-comers Anya Taylor-Joy and Johnny Flynn (who have delectable chemistry), and a hilarious supporting turn from Bill Nighy. But what really sets de Wilde’s Jane Austen adaptation above the rest is the way in which she manages to capture the vicious humor of Austen’s prose. There is an acidity to this Emma, which makes her character’s arc all the more triumphant and the film itself so thrilling to watch. 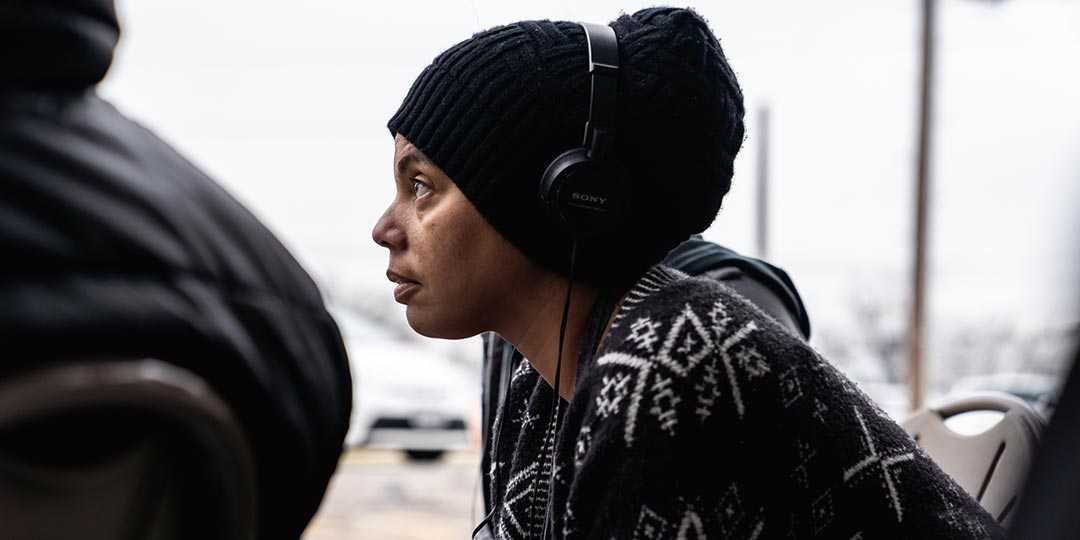 Writer/director Channing Godfrey Peoples on the set of ‘Miss Juneteenth’
Inspired in part by writer-director Channing Godfrey Peoples’ own youth celebrating Juneteenth and attending Miss Juneteenth pageants, her feature film debut premiered to near universal acclaim last summer. Led by lived-in performances from Nicole Beharie, for which she received the Gotham Award for Best Actress, ‘Miss Juneteenth’ navigates well-worn mother-daughter story beats with freshness and vigour. Shooting the film on location in Fort Worth, Texas, Peoples creates a real sense of place and economic position for her characters, and her personal connection to the subject and setting adds a palpable warmth. 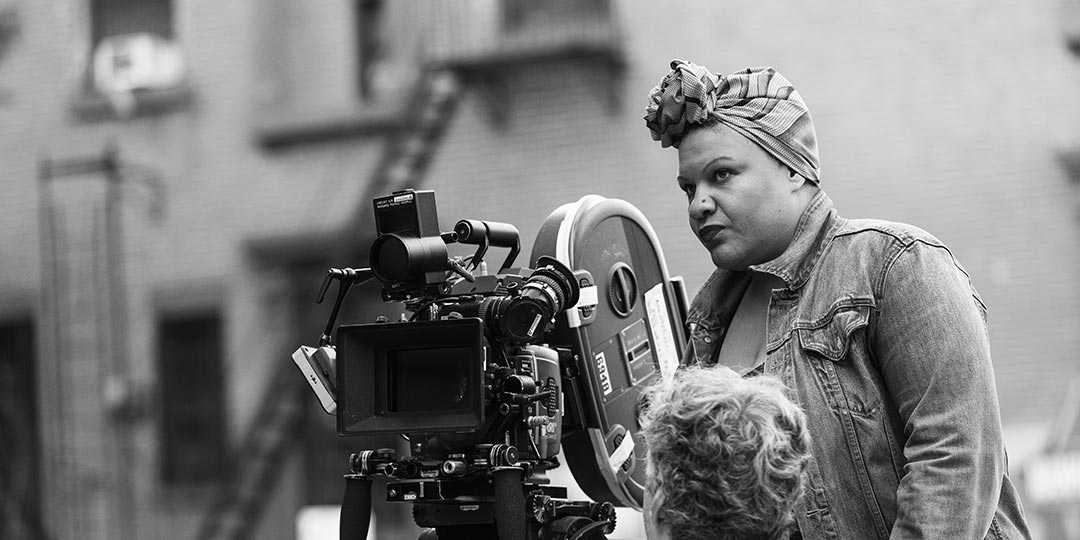 Director/writer/star Radha Blank on the set of ‘The Forty-Year-Old Version’
After debuting at Sundance and winning the U.S. Dramatic Competition Directing Award, The Forty-Year-Old Version was a labor of love for Radha Blank, who not only wrote and directed the film, but also stars in the lead role. Loosely based on her own life, the film follows Radha as she hits forty and comes to terms with not living up to the promise of once being featured on 30 under 30 list. Radha takes her frustrations out through her alter ego: a rapper called RadhaMUSprime. Blank mines her own life and artistic struggles with humour and wisdom. She also addresses racial bias in the industry both through scenes in the film, but also in her choice to make the film in luminous B&W – not for financial reasons, but to evoke the art films she as a filmmaker loves.

There really is no shortage of exceptional films directed by women and after 93 years of the Oscars mostly shutting them out, enough is enough.